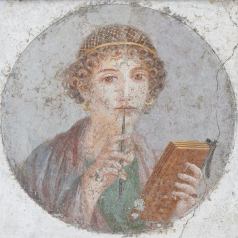 The poet C. D. Wright died in January of this year. She was an American original. She was a critical thinker of the first order, an experimenter.

For no apparent reason, I thought of her when I saw this fresco painting (unearthed in Pompeii) of a woman with a stylus and book. Something in the thoughtful musing look in this portrait suggested a critical eye, analysis, consideration–a keen and penetrating intelligence. She will reflect before she writes, but she has opinions she  is not afraid to share.

A collection of Wright’s pronouncements, which she combined and arranged in a sort of extended prose poem, was published as “69 Hidebound Opinions.” The hidebound is both tongue-in-cheek and earnest; typical, really, of Wright’s work. I’ll post the link and also share a few that I find intriguing.

“To opt to be a poet, is to have some resolve. It leaves you free–to sing as you will, with the lungs god gave you–even if no one but god might hear. It leaves you that naked and obligated to sing your best. Suzuki teaches that ‘in the beginner’s mind there are many possibilities; in the expert’s mind there are few.’ Beginner’s mind then, is not only where you start, but where you must remain. It is what will keep you–long after you have children, job, house, dog, too many keys on your ring–free.”

“An atmosphere of depression will arouse artists’ attention over an atmosphere of prosperity nearly every time. Because it derives from consciousness, art is critical. Also true, ruins are beautiful to us; the Blues make us feel good; it is through the wound that we perceive the body whole.”

Yet, #42 says, “It is left to the poets to point out the shining particulars in our blunted lives like the strands of blue lights Cotter, Arkansas, draped every haunting Christmas from one empty storefront to the empty storefront across the street for eight unoccupied blocks.”

An aside: [I want to write about the sleeping porch, which I loved in my early childhood and which hardly exists anymore. I’d like to sleep on one again, build a house that has a sleeping porch. Also, my joy at discovering my former neighbor had–and used–a root cellar; his joy at discovering the young person new to the neighborhood was fervent about her truck patch.]

Poetry is the language of intensity. Because we are going to die, an expression of intensity is a necessity.

Extended awareness, isn’t that central to the art?”

“Gradually one comes to fathom exactly what it is one has chosen–what is poetry. Poetry avails itself of the listener, the watcher. Whether called upon to emancipate, comfort or forecast, poetry responds. The possibility that the poem you were born to write, will not join you on the porch this summer or the next, looms taller than the sunflowers and the hollyhocks. It could have taken the fork to the river or ended up at the slaughterhouse. It could have died as quietly as the moth on the screen. Or just borne itself up on the breeze. Who can say. This is the poet’s choice: to attend a presence no one else was aware of, to spend the better part of a lifetime preparing for an arrival, that could not occur but for her attention, that would not in fact otherwise make its blaze on this world.”

I close with #51: “Now that I am beyond the initial paralysis of calling one’s first teachings into question, I am left with: be critical and sing.”