From as far back as quite early childhood, I have been interested in science: zoology, botany, biology, entomology, physics–if I had been mentored differently, I might have become a researcher instead of a poet. I possess that quality of curiosity that pushes for details, a trait that people refer to as ‘geeky.’ For me, it is fun to contribute my backyard observations to The Dragonfly Woman’s research or to the Eastern Pennsylvania Phenology Project, which asks for assistance from ‘citizen scientists.’ This evening, I am taking some elderly best beloveds to a fundraiser concert for March for Science.

Empiricists have to begin as observers, and here’s where my science and poetry passions twine. Today’s backyard notes involve gray squirrels and the hypothesis that they learn behavior swiftly through their (many) generations.

My backyard is essentially a lawn and meadow, quite open, with two pear trees and a quince almost halfway between the property lines, both of which feature narrow woodlots and brush hedgerows. For 16 years, we had a dog; between the dog’s presence and the fact of hawks–of which there are many–gray squirrels seldom ventured from one side of the property to the other. Both woodlots are replete with walnuts and sumac and wild cherries, so squirrels really did not need to get across the meadow.

As of last year, though, they have learned they can cross the lawn in relative safety, as long as they exert haste and stop nowhere along the way. The dog died, but the hawks are still around. 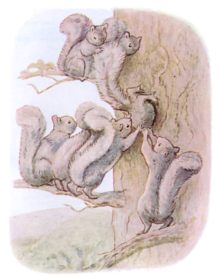 Gray squirrels by Beatrix Potter, “The Tale of Timmy Tiptoes.”

They may have learned this behavior last summer, when a mid-season drought led to very thirsty squirrels who were brave enough (no dog!) to dash to the pear trees and harvest pears. Juicy!

So now, they race across the lawn…to have sex. Squirrel sex is a frolic of prinking, rolling, tumbling–a bundle of tails and feet, a flurry of gray and white fur at the foot of a tree, dry leaves scattered by the wrestling. Then the pair scurries off side by side. Today is actually the first time I have witnessed squirrel mating, though clearly it occurs frequently to judge by the numbers of these creatures in our yard. 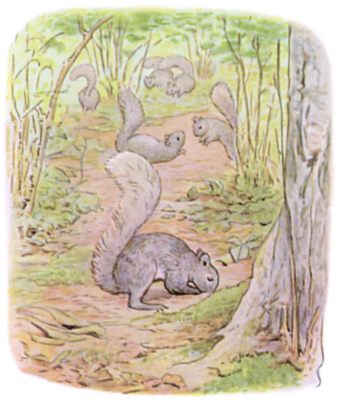 From Potter’s “The Tale of Timmy Tiptoes”

I think of Beatrix Potter as an excellent example of the citizen scientist. While her paper on mycology concerning the reproduction of fungi via spores [“On the Germination of the Spores of Agaricineae“] was not accepted as science at the time she wrote it, her observations were correct.

Her drawings of animals are marvelously accurate, even when she puts them into dresses, jackets, bonnets, and tiny slippers. Though she personifies them, she chooses human attributes that suit animal behavior rather than the other way around.

Science, then, is close reading of the world’s phenomena, not really so different from literary scholars with their close reading of texts. Poets also view the world with close reading–observation, curiosity, changing perspective–asking questions about what we think we know. And revelations sometimes occur. Like squirrel behaviors, including squirrel sex; like spores, and the life cycle of salamanders, and dragonfly swarms.