Tolerance, as defined in the OED, means endurance, as of pain or treatments; it is also the tiny allowance of imperfection in coining or machinery, the acceptable out-of-round. But the term has become popular recently under its third definition, “freedom of bigotry or undue judgment upon the actions or behaviors of others.” It has indirectly become the target of people who complain about over-use of “politically-correct language.”

Tolerance is not one of the Virtues, but it tends to have a slightly virtuous connotation, sometimes with an irritating hint of self-righteousness. An acquaintance of mine said once, “Quakers! They’re so damned tolerant,” as if it were an attribute to be avoided by sparkling, sexy people who are analytical and quick to judge. I have known some mightily opinionated Quakers in my time and will attest that tolerant folks can hold strong opinions. The connotation of tolerance to mean somehow wishy-washy or evasive is an unfortunate one. And it’s wrong.

My parents taught tolerance. This was a necessary trait in a family full of passionate, witty, highly-opinionated and creative people. I learned that I could disagree with my sister completely and still love her and accept her point of view, even if I could never in a million years adopt her perspective. My father marched on Birmingham and Washington in the 1960s, and we learned that people who do not look like us are no less like us than our neighbors—and we learned to be polite to our neighbors, some of whose values and opinions we didn’t particularly care for, but whom we tolerated as members of the community. Tolerance is a component of empathy in two directions: empathy inspires in us the ability to practice tolerance of others, and the practice of tolerance itself enables us to feel empathy with others.

Without empathy, no altruism; without altruism, no society. Tolerance has an important place in human nature. The simplistic slogan “Teach tolerance” has value only if we can remove the negative slap-dash judgment of tolerance as some sort of liberal-PC value rather than as what it is, a practical behavior necessary for social interaction. Good manners, for one thing. And yes, that means that sometimes we must endure the psychic pain of listening to a person we desperately want to judge negatively, or bear with the person who is slightly “out of round.”

Practicing tolerance doesn’t mean giving up our own values, it merely forces us to withhold judgment a little longer than usual and to endeavor to discern, and acknowledge, another person’s perspective. Can we argue? Can we disagree? Certainly. Will we respect that perspective? Maybe not. But we can learn a great deal from the exercise.

Here is a poem from my collection The Capable Heart. Tolerance and an attempt to understand another perspective are not just for human beings. This poem looks at my daughter’s point of view, my own, and the horse’s. More broadly, the piece is about all of the things I’ve mentioned in this post—if that’s how my reader would like to interpret it. (Of course, I am ready to acknowledge other interpretations and perspectives!)

WAYS WE ARE ALIKE

I wanted a way to embrace
my daughter’s fascination.

To overcome my own fear, with carrots,
with a lead rope and a soft brush.

I touched the withers and the
warm, broad chest;

I held the lead. Let pulsing lips
explore my hands, my jacket.

The narrow nose stretched
under my fingers and

I rubbed the strong, shallow bone
above curious, sensing nostrils.

My daughter tells me the many ways
horses and I are alike.

They are beautiful, and
they understand fear. 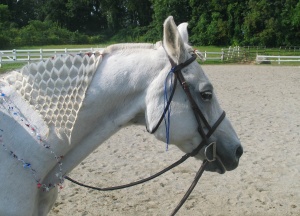 2 comments on “On Tolerance”