This morning, I noticed catbirds engaged in nest building activities. Then I saw mourning doves mating near the garden–must be time for the second brood.

I do not know a great deal about bird behavior; but many of the smaller birds in my region raise two broods, one in spring and one in early summer. My not-very-scientific observation tells me that the second brood is often less successful–that fewer eggs are laid (or hatch). I could be wrong about that generality, but it seems to have held true in my yard for the past ten or 12 years. A little research would inform me, I suppose. For now, though, I am happy to rely on observation.

Sometimes I am eager to track down information (such as facts on songbird reproduction cycles). This week, though, I prefer to spend my time on looking about and writing. I’m working on a kind of “second brood” of new poems, and that is exciting.

I have also taken walks on two urban above-street-level parks, one in New York City (the Highline) and one in Bethlehem, Pennsylvania, the Hoover-Mason Trestle Park at Steel Stacks. The former park is pretty well-known; the latter just opened to the public and ought to be better known than it is.

Here’s some information on the site itself from the Landezine website that highlights the work of SWA group on the Sands Casino/Bethlehem City project and some of the challenges:

One of the most prominent examples of redirecting the environmental legacy of a post-industrial landscape can be traced to the south banks of the Lehigh Canal, in the city of Bethlehem, Pennsylvania. Comprising 1,800 acres (20 of which belong to this project) and 20 percent of Bethlehem’s total land mass is the former headquarters of Bethlehem Steel Corporation (BSC). Founded in 1904, the company continued to operate until 1998, when US manufacturing divestment, foreign competition, and short-term profit goals finally led to its demise. After almost a century of operation, the effects of Bethlehem Steel’s [1995] closure on the city were heartbreaking, as thousands of jobs disappeared instantly, along with 20 percent of the city’s total tax base. All that remained was an impending bankruptcy claim and the largest brownfield site in the country.

You read that correctly–the largest brownfield site in the USA. The EPA defines a brownfield as “real property, the expansion, redevelopment, or reuse of which may be complicated by the presence or potential presence of a hazardous substance, pollutant, or contaminant.” Acres and acres of said brownfield were left by Bethlehem Steel, and about 20 acres are being redeveloped at present. The park around the steel mill, which follows the elevated trestle around the enormous works, offers a fascinating view at what remains of the United States’ industrial heyday and highlights how significant these mills were. Nice bit of history, nice walk.

I’m not sure these urban parks really move us toward sustainability, but they are at least creative “repurposing” that may help make people more aware of the things that have brought us to where we are today (for good or ill). Perhaps another form of second brood? 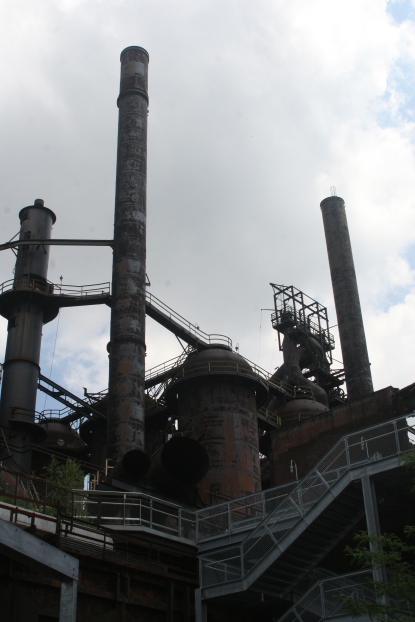