So many “heat bubbles” world-wide this summer. We happen to be in one of them–high temperatures, even at night, and barely any rain in the past three weeks. No rain in the forecast for days ahead. Drought. Temperatures in the 90s. It’s not even as humid here as it usually is in summer. But humid enough. I dislike air conditioning as a rule, but boy am I grateful for it and privileged to have it.

The sunflowers in my garden grew taller than average this year yet are now drooping from high temperatures and lack of water. Young deer show up outside of their usual territories while trying to find forage that isn’t crispy. They (and the birds) gobbled up the wild berries so quickly that I managed to pick only a pint or so of wineberries. The drought hit after blackberry season, though, so we did get a nice harvest of those.

It’s not just the deer behaving differently because of the weather. I notice that squirrels and some birds have altered their usual patterns as well. This evening, I got a panicked call from a friend who lives in a nearby city–a bird had found its way into her son’s attic room through a poorly-installed window air conditioner, and all the windows up there were stuck shut due to the humidity. The poor bird was fluttering crazily, and she had no idea how to free it. I’m guessing the bird (it appeared to be a juvenile catbird) was seeking shade and shelter, and saw the gap between the wall and the unit as a safe space as the sun began to go down.

I have not had a lot of experience rescuing caught birds, but this is the second time in a week I was summoned to assist a frightened avian. On Monday, one of our summer library assistants asked for help with a fledgling robin that was unable to clear the brick wall of our entry ramp in order to join its parents, who were chirping from a nearby shrub. That task was easier than rescuing an attic-trapped bird, but I succeeded in both cases.

I shall rename myself Papagena!

Meanwhile, we have finally taken steps to remove house sparrow nests from our damaged cedar siding, an eviction over which we have no regrets. The layers of nesting material in former woodpecker holes (which the house sparrows enlarged and populated) make an interesting study in avian biology; they also make a mess. More about the problematic house sparrow at this post. Suffice it to say, there’s a ton of work involved, including lift boom rental, that we must manage under lousy-hot conditions.

Bird-catcher, bird-rescuer, and bird-evictor. Here I am, keeping things in balance.

*The Birdcatcher is the title of a wonderful collection of poems by Marie Ponsot. I recommend finding a copy and reveling in her work. 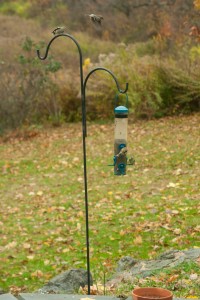 Two kinds of chickadees (black-capped and Carolina). White-breasted nuthatches. A tufted titmouse, bluejays, goldfinches in their brown-ish phase. The winter birds have arrived; despite a strangely warm November, the birds molt into dull plumage or migrate on schedule. I try to remember that when I feel worried about climate change: some forms of life are adaptable, change is normal, anxiety accomplishes nothing, and right action is possible.

I do not mean that we ought to ignore changes, especially those for which we have been responsible. When human beings get concerned enough to act, there’s a great deal of harm we can undo.

In the late 1960s and early 1970s, people in the USA became anxious about pollution. I am old enough to recall when New York City’s famous skyline was obscured by a yellowish-gray haze almost every day. Days we could see the Empire State Building shining in sunlight without smog were rare.The problems Chinese cities today are having with polluted air were happening for the citizens of Los Angeles and New York fifty years ago, but we took action–surprisingly enough–and eventually state and federal regulations required that technology be implemented to ease the problems technology had created.

This process was not speedy or easy, but it worked. I visit New York fairly frequently, and the sky is almost always smog-free. My now-grown children have never seen the skyline hidden under layers of air pollution.

Can humans undo the damages we have wrought to our oceans, air, rain forests, mountains, deserts, rivers, planet and its climate? Probably not–not all of it, certainly–and I doubt there is much we can do to stave off the “sixth extinction.” We have to accept we are part of the change, for good or ill, and to find ways to do less harm in whatever time remains to us–to activate compassion.

Meanwhile, I await the juncos. They usually arrive around the first week of December.