Slow Muse blogger Deborah Barlow–artist, critic–recommended Kay Larson’s recent book on John Cage, Where the Heart Beats. Silence was so significant in Cage’s work and thinking that, given my recent reflections on noise or lack thereof, this seemed the right time to pick up that text. Lo and behold, synchronicity of several kinds. The author, Kay Larson, thanks John Daido Loori, a rōshi of the Mountains and Rivers order of zen Buddhists and long-time abbot of Zen Mountain Monastery near Woodstock, NY. She studied with him beginning in 1994.

In 1992 and 1993, I attended two weekend retreats there; the brief days remain vivid in my memory. Perhaps more on that another time. Haiku is involved…and silence.

Recently, given some irregular bumps along the walk of life that have led to excessive “head-noise” (my term for stress I can’t quite let go of), I have been returning to some zen-influenced texts and trying to remember to breathe and to be here now. Arne Naess’ writings on joy and environment and Buddhism–I’ve just finished reading a collection of his essays–dovetail very neatly into this reflective book on Cage’s life, work, and influences. Larson’s “Zen” approach to writing about Cage is so gentle and refreshing that reading this book soothes me. I find within myself a kind of inner silence, my breathing returning to its slower, quieter pace, as I read the brief selections of prose Larson uses to explore the life of the mind of this peculiar and innovative artist/composer/writer.

Very like philosophical analogies, Confucian fables, parables of many cultures, koans, meditations, prayer and other forms of contemplative practice.

What reduces head-noise? For me, the best strategy is calmness, but I am not an adept at meditation. I have sat zazen badly, and learned much from the practice of sitting zen badly, but I have never managed to make meditation a genuine practice in my life. Deep breathing and slow movement, such as tai chi or qi gong, seem to work better for me. In addition, the Quiet Place. I settle down better when I can detach from computer, phone, electric lights, appliances. Art reduces head-noise: art requires attentiveness. Poetry, yes. Gardening, walk 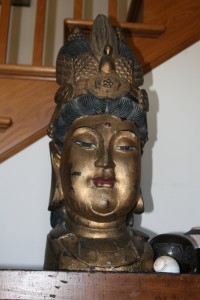 Philosophy, not so much. (Alas.)

Politics? Weather reports? Analysis? ….as the Buddhist monks might say: mu. Translation into teen-speak from five years ago: “not.”

And also, compassion. The practice of compassion keeps a person attentive and also relaxed. It is a form of active prayerfulness, of acceptance of self through the acceptance of others. After the bruises and bashings of a presidential election year in 21st-century United States, a little compassion would reduce the malaise and anxiety we have had to endure intellectually, emotionally, and–in the wake of bad storms on the east coast–physically.

I give you Quan Yin, or Guanyin, or Kannon Bodhisatttva, known as Avalokitesvara  in Sanskrit and termed the goddess of mercy, a counterpart to the Christian Jesus or Mary. This being represents the compassionate, merciful, kind, non-judgmental, accepting aspect of the cosmos, the universe, or god. I realize that it seems I may have wandered a bit far afield of Cage at this point. But read Larson’s book; I haven’t drifted as far from my topic as it seems.

And just because it does seems as though I am rambling considerably in this post, I think I can close with a poem from my collection Water-Rites, and somehow make it fit with these topics:

I am thinking about the cowbirds who fought
in my driveway this morning
and how they struggled, one overbearing the other,
pecking at its head, keeping it pinned
to gravel. I wonder, now, why I chose to stop
and free the losing bird from its aggressor,
lift its bloodied damp body in my hands,
rescue it even though
it was also a cowbird, a pest
that usurps the nests of thrushes—
although I respect the dominion of beak & claw,
I want to preserve the generation
of songbirds; there was no reason for me
to intervene, no logic but somehow I felt
surely there is a place,
in the battle that is this world,
for the mandate of compassion.